Emily Cameron -Widowhood in Wandsworth in 1915

My grandparents and their four sons (one of whom was my dad John) lived in Atheldene Road in Wandsworth at the start of WW1. My grandfather Thomas had been a Royal Marine for 12 years, leaving in 1905 to marry Emily Potter. Emily was born on February 2nd 1877 in Lambeth, London. She was born into a poor family and her father’s occupation was described variously as general labourer, green grocer, costermonger and hawker of fish at different points in time. After leaving the Marines, he worked at Nine Elms and Clapham Junction and had just been promoted to a signal man in 1914, his pay increasing to 26/- a week. 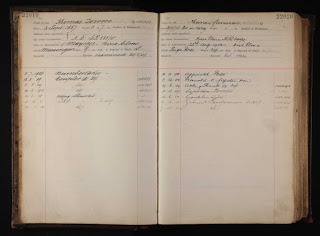 Things were on the up. However, as a member of the Royal Marine Reserve Brigade, Thomas was quickly called up and sent to France. He took part in the defence of Antwerp during which, he went out on patrol and was shot in the head. He survived and was brought back to England but died on his 40th birthday on October 20th 1914. Tragically, Thomas would never have been called up had he not been in the reserve; he was too old. 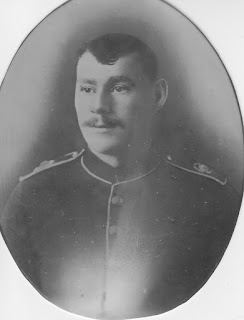 
Shortly after Thomas had died, Emily received a letter that Thomas had written whilst in hospital. Receiving the letter must have been particularly heartbreaking as Thomas had written that he believed he would soon be transferred nearer to home. I also have a copy of the letter of condolence written by his CO, surely the first of many he would go on to write. He had served with Thomas before the war, knew him well and said “he was the finest of many good men, was brave under fire and generally played the game” – this is touching – Thomas was indeed a keen sportsman and this comment is so very “Edwardian” and of its time. 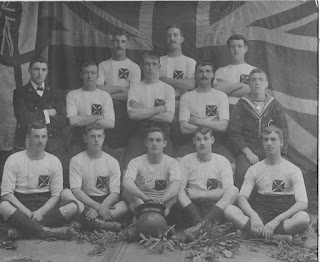 Thomas’s funeral was covered by the local papers as the deaths of soldiers were still deemed newsworthy at this early stage of the war and he had a full military funeral, as reported in his local paper...

The family were so poor that when I tried to find his grave in the 1990s, I discovered that there was no headstone. I contacted the Commonwealth War Grave Commission, who arranged for a headstone to be made and erected on his grave – I was so thrilled that he at last had his own memorial – he is remembered on a memorial at Waterloo Station along with other colleagues who worked for the same  rail company and who also  perished in the war 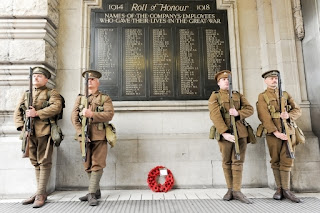 The year following Thomas’s death must have been a terrible struggle. On the first  anniversary of his death – 20 October 1915, 100 years ago,  Emily was looking after their four sons, the eldest of whom was 8, the youngest 5. She took a job in a laundry and set about raising her sons as a single mother, a daunting prospect for any woman in 1914 with no welfare state or National Health Service for support. She would work in the laundry by day and briefly return home to feed her boys before going back out to scrub floors by night. Emily’s frantic schedule meant that she would often put the boys to bed in their school uniforms as she would not be there to prepare them for school. 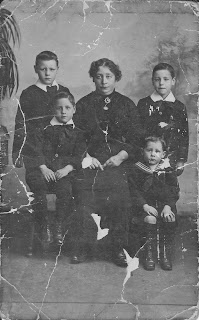 Emily and her four sons, Thomas, John, Richard and James

I find the thought of her day to day struggles unutterably sad. Thomas was a really loving husband and father – you can see this in his postcards and letters to his wife and boys; he had been on the way up in his employment with the railway and Emily had such a wonderful future to  look forward with him. He had even bought the boys musical instruments to play as he wanted them to get as much culture as possible. All that changed. The instruments were sold. The lads had to work as well when possible – though one son – James –got a scholarship to Emmanuel College in London. How did she manage it?! The four boys were devoted and looked after her when they were young men. They all played a lot of sport, read and got on as best they could. They were all a credit to her, having families, doing well in relatively low paid, but secure jobs – sadly James died at El Alamein,  a fact  that was kept from Emily just before she died. 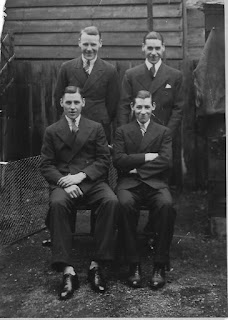 The four boys as young men – happy and well!

There were no medals or citations for Emily but she was a truly wonderful, remarkable, uneducated but lovely lady. Thank you to the grandmother I never met, but whose hard work helped me become who I am today and of whom I am indescribably proud.